A Lesson Plan based on The Armenian Genocide – News Accounts from the American Press, 1915-1922

This curriculum extracts articles from the book, “The Armenian Genocide: News Accounts from the American Press,” compiled by Richard Kloian (available from GenEd and can be ordered for $25 by emailing). Including 200 New York Times articles, other journalistic accounts, U.S. Ambassador Morgenthau’s personal account of the genocide, survivor accounts, telegrams from the genocide perpetrator, photographs, and more, the book presents a compelling chronicle of the systematic deportations and massacres of the Armenians of the Ottoman Empire, perpetrated by the Turkish governing authorities between 1915 and 1922.

The lesson allows students to: 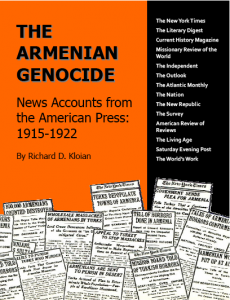 Use the download button for the PDF of this free curriculum