The Genocide in Darfur 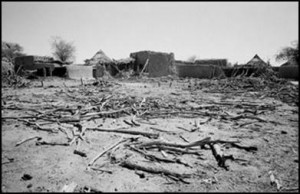 Violence and destruction are raging in the Darfur region of western Sudan. Since February 2003, government-sponsored militias known as the Janjaweed have conducted a calculated campaign of slaughter, rape, starvation and displacement in Darfur.

It is estimated that 400,000 people have died due to violence, starvation and disease. More than 2.5 million people have been displaced from their homes and over 200,000 have fled across the border to Chad. Many now live in camps lacking adequate food, shelter, sanitation, and health care.

The United States Congress and President George W. Bush recognized the situation in Darfur as “genocide.” Darfur, “near Hell on Earth,” has been declared the worst humanitarian crisis in the world today.

Picture: The remains of the village of Jijira Adi Abbe in Darfur, western Sudan, after the government attack. 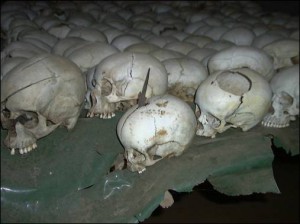 Beginning on April 6, 1994, groups of ethnic Hutu, armed mostly with machetes, began a campaign of terror and bloodshed which embroiled the Central African country of Rwanda. For about 100 days, the Hutu militias, known in Rwanda as Interhamwe, followed what evidence suggests was a clear and premeditated attempt to exterminate the country’s ethnic Tutsi population. The Rwandan state radio, controlled by Hutu extremists, further encouraged the killings by broadcasting non-stop hate propaganda and even pinpointed the locations of Tutsis in hiding. The killings only ended after armed Tutsi rebels, invading from neighboring countries, managed to defeat the Hutus and halt the genocide in July 1994. By then, over one-tenth of the population, an estimated 800,000 persons, had been killed. The country’s industrial infrastructure had been destroyed and much of its population had been dislocated.

Genocide in Bosnia and Herzegovina 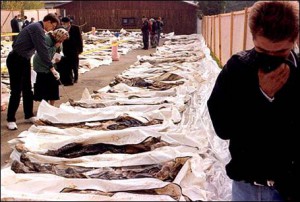 In the republic of Bosnia-Herzegovina, conflict between the three main ethnic groups – the Serbs, Croats, and Muslims – resulted in genocide committed by the Serbs against Bosnian Muslims. In the late 1980’s a Serbian named Slobodan Milosevic came to power. In 1992 acts of “ethnic cleansing” started in Bosnia, a mostly Muslim country where the Serb minority made up only 32% of the population. Milosevic responded to Bosnia’s declaration of independence by attacking Sarajevo, where Serb snipers shot down civilians. The Bosnian Muslims were outgunned and the Serbs continued to gain ground. They systematically rounded up local Muslims and committed acts of mass murder, deported men and boys to concentration camps, and forced repopulation of entire towns. Serbs also terrorized Muslim families by using rape as a weapon against women and girls. Over 200,000 Muslim civilians were systematically murdered and 2,000,000 became refugees at the hands of the Serbs.

The Killing Fields: The Cambodian Genocide 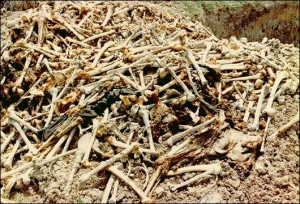 From 1975-1979, Pol Pot led the Khmer Rouge political party in a reign of violence, fear, and brutality over Cambodia. An attempt to form a Communist peasant farming society resulted in the deaths of 25% of the population from starvation, overwork, and executions.  By 1975, the U.S. had withdrawn its troops from Vietnam, and Cambodia lost its American military support.  Taking advantage of this opportunity, Pol Pot’s Khmer Rouge seized control of Cambodia. Inspired by Mao’s Cultural Revolution in Communist China, Pol Pot attempted to “purify” Cambodia of western culture, city life, and religion. Different ethnic groups and all those considered to be of the “old society”, intellectuals, former government officials, and Buddhist monks were murdered. “What is rotten must be removed” was a slogan proclaimed throughout the Khmer Rouge era. 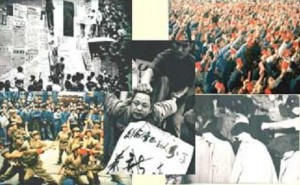 October 1, 1949 marked Mao Tse-tung’s proclamation of the People’s Republic of China. The Chinese Communist Party launched numerous movements to systematically destroy the traditional Chinese social and political system. One of Mao’s major goals was the total collectivization of the peasants. In 1958, he launched the “Great Leap Forward” campaign. This act was aimed at accomplishing economic and technical development of the country at a faster pace and with greater results. Instead, the “Great Leap Forward” destroyed the agricultural system, causing a terrible famine in which 27 million people starved to death. 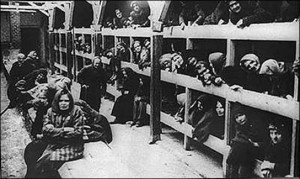 It began with a simple boycott of Jewish shops and ended in the gas chambers of Auschwitz as Hitler and his Nazi followers attempted to exterminate the entire Jewish population of Europe.  The Holocaust took the lives of close to six million Jews during the World War II era. Anti-semitism was the central component of Nazi ideology.  While the Nazis also murdered many millions of Poles, Russians, Roma, Sinti, Serbs, Czechs, homosexuals, and political opponents, only the Jews were slated for total annihilation. The “final solution” was partially successful through the process of genocide.  The Nazi Party who first targeted the Jews, then isolated them into ghettos, then deported their victims to concentration camps where most perished. Others became Nazi victims not because of who they were but because of what they did – Jehovah’s Witnesses, the dissenting clergy, Communists, Socialists, and other political enemies.

The Rape of Nanking 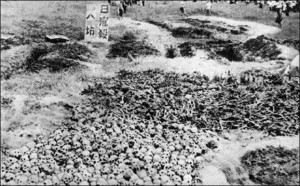 In December of 1937, the Japanese Imperial Army marched into China’s capital city of Nanking and proceeded to murder 300,000 out of the 600,000 civilians and soldiers in the city. After just four days of fighting, Japanese troops smashed into the city with orders issued to “kill all captives.”  The terrible violence – citywide burnings, stabbings, drownings, rapes, and thefts – did not cease for about six weeks. It is for the crimes against the women of Nanking that this tragedy is most notorious. The Japanese troops raped over 20,000 women, most of whom were murdered thereafter so they could never bear witness. 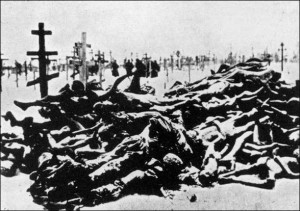 In 1932-33, Joseph Stalin, leader of the Soviet Union, imposed the system of land management know as collectivization. This resulted in the seizure of all privately owned farmland and livestock. By 1932, much of the wheat crop was dumped on the foreign market to generate cash to aid Stalin’s Five-Year Plan. The law demanded that no grain could be given to feed the peasants until a quota was met. By the spring of 1933, an estimated 25,000 people died every day in the Ukraine. Deprived of the food they had grown with their own hands, an estimated 7,000,000 persons perished due to the resulting famine in this area known as the breadbasket of Europe. 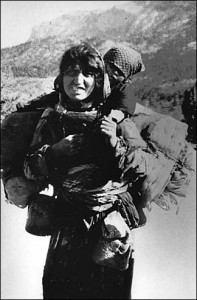 The Armenian Genocide was carried out by the “Young Turk” government of the Ottoman Empire from 1915 to 1918. Starting in April 1915, Armenians in the Ottoman armies, serving separately in unarmed labor battalions, were removed and murdered. Of the remaining population, the adult and teenage males were separated from the deportation caravans and killed under the direction of Young Turk functionaries. Women and children were driven for months over mountains and desert, often raped, tortured, and mutilated. Deprived of food and water, they fell by the hundreds of thousands along the routes to the desert. Ultimately, more than half the Armenian population (1,500,000 people) was annihilated. 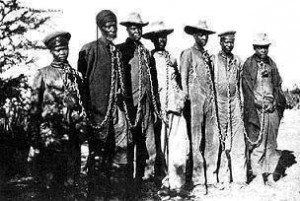 The Herero Genocide occurred between 1904-1907 in current day Namibia. The Hereros were herdsmen who migrated to the region in the 17th and 18th centuries. After a German presence was established in the region in the 1800s, the Herero territory was annexed (in 1885) as a part of German South West Africa.

A series of uprisings against German colonialists, from 1904–1907, led to the extermination of approximately four-fifths of the Herero population. After Herero soldiers attacked German farmers, German troops implemented a policy to eliminate all Hereros from the region, including women and children.

Picture: Hereros captured by the German Military in 1904.

Genocide of the Native Americans 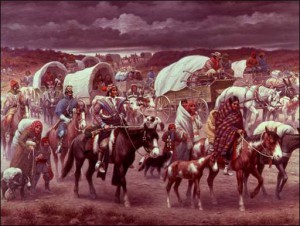 The genocide of peoples indigenous to the U.S. portion of North America proce-eded along different tracks, each defined by the policies of the colonial power pursuing it. The colonization began in 1607 when England’s Jamestown colonists arrived in present-day Virginia with instructions to “settle” the already heavily populated coastal area. Beginning in 1830, the U.S. undertook a policy of “removing” all native people from the area east of the Mississippi River. In the series of interments and thousand-mile forced marches which followed, entire peoples were decimated. The Cherokees, for instance, suffered 50 percent fatalities during the “Trail of Tears”; the Choctaws, Chickasaws, Seminoles and Creeks, 25 to 35 percent apiece.

Picture: “The Trail of Tears” Painting by Robert Lindneux in the Woolaroc Museum, Bartlesville, Oklahoma.

Unlike most twentieth-century cases of premeditated mass killing, the African slave trade was not undertaken by a single political force or military entity during the course of a few months or years. The transatlantic slave trade lasted for 400 years, from the 1450s to the 1860s, as a series of exchanges of captives reaching from the interior of sub-Saharan Africa to final purchasers in the Americas. It has been estimated that in the Atlantic slave trade, up to 12 million Africans were loaded and transported across the ocean under dreadful conditions. About 2 million victims died on the Atlantic voyage (the dreaded “Middle Passage”) and in the first year in the Americas.