Twelve imposing pylons, representing the twelve provinces where Armenians were massacred, surround the eternal memorial flame inside the monument. The flame burns continuously to represent the un-extinguishable Armenian spirit. “Swallow’s Fortress,” is named for a bird that always returns to its nest, even if its home has been destroyed. A unique portion of the monument is the tall, needle-shaped shaft beside it, which represents the rebirth of the Armenian people.

During  the 50th anniversary of the Armenian Genocide in 1965, a massive outburst of demonstrations throughout the Soviet Republic of Armenia, demanding a commemorative monument, led to the government’s decision to build Tsitsernakaberd. Since that time, every year on April 24th, thousands of people commemorate the Armenian Genocide with a visit to the monument, and throughout the year, more visit Tsitsernakaberd Memorial Complex, which includes a genocide museum and research institute. 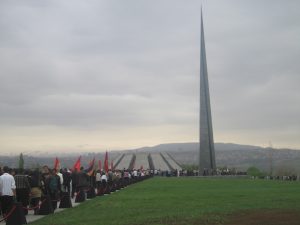 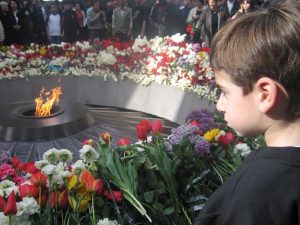