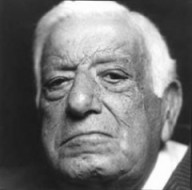 When the massacres began, I was 12 years old. I remember, they first took all the men of our village and kill them. The rest of us were deported. I don’t know how many hundreds we were. Everyone according to his ability rented a donkey or a horse and we left.
We went from Albistan to Zeitun to Marash to Aintab. We camped on a farm behind Aintab College, near some newly dug foundations for houses. They were simply large holes in the ground. You understand? An epidemic had broken out in our caravan and people were dying all around us. They started filling those foundations with dead bodies. Two, three, four, five bodies on top of each other.
From Aintab, orders came that

everyone over the age of 12 was to be sent to Deir-El-Zor. A friend of mine and I escaped, but we were caught later and this time they sent us to Bizib then toward Biredjig. Biredjig is on the shores of the Euphrates. You understand? It is on the other side of the river. We stayed in a khan (an inn) on this side. Caravans would come through there and be sent off toward the desert; hundreds and hundreds of Armenians. We used to see dead, bloated bodies floating in the river. 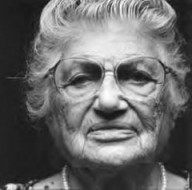 My brother-in-law was American Consul Davis’ body guard in Mezre and the consul himself saved my father’s life. There was a Turkish gendarme by the name of Shadhe who wanted to kill my father. Consul Davis came all the way to our door in Pazmashen. My father was hiding in the back, in the wood shed. He came on his horse and took my father back with him to the consulate.
When the deportations began, I went to Mezre to say goodbye to my father. He cried. The consul saw him and told me to stay. Later, my mother escaped from the deportation and also came to the consulate. We were in the American consulate during the deportations. Consul Davis saved us. Everybody else, my sisters, my maternal aunt—all of them, all of them—were deported. Our whole village was wiped out.
We lived in the consulate until 1922. On September 7, 1922, our family left Kharpert along with 250 Armenian orphans on horses and wagons. My father was asked by the Near East Relief to oversee the transportation of these orphans from Kharpert to Aleppo.
From Aleppo we went to Beirut, then to Marseille and then by ship we came to Providence, Rhode Island. 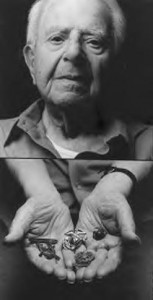 In 1909, during the Adana massacres, Turkish soldiers attacked Kessab. I was merely a boy then. They were 20,000 strong with Mausers and other artillery. The men of our town fought back, my father among them, with ancient hunting rifles. We lost 50-60 men before we fled. We returned 5-6 days later to find all our houses burned to the ground. It took us months to rebuild.

In 1915, we were the last to be deported out of Kessab because we were Protestant. The American Ambassador in Bolis had apparently secured guarantees for our safety, but we were deported anyway. They took us toward Der-Zor—the interior Syrian desert. Our whole family: my father, mother, four brothers, two sisters. I was 20-21, at the time. We loaded everything we had on mules and horses and set out under armed guards. They took us to Meskeneh on the Euphrates river. Meskeneh was a huge outdoor camp where ten of thousands of Armenians had been deported—bit by bit they were sent to Der-Zor, to their death. We were there for awhile. We lived under tents along with a lot of others from Kessab. Most of the time we had nothing to eat. Sometimes my father would buy bread from the soldiers but they had mixed sand with the flour—so we ate this hard bread and sand crunched under our teeth.
Meskeneh was a horrible, horrible place. 60,000 Armenians had been buried under the sand there. When a sandstorm hit, it would blow away a lot of the sand and uncover those remains. Bones, bones, bones were everywhere then. Wherever you looked, wherever you walked. 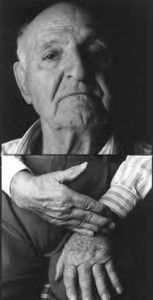 I do not remember how many days our decimated caravan marched southward toward the Euphrates River. Day by day the men contingent of the caravan got smaller and smaller. Under pretext of not killing them if they would hand over liras and gold coins, men would be milked by the gendarmes of what little money they had. Then they would be killed anyway.
Days wore on. We marched through mountain roads and valleys. Those who could not keep up were put out of their misery. Always bodies were found strewn by the wayside. The caravan was getting smaller each day. At one place, my little grandmother, like Jeremiah incarnate, loudly cursed the Turkish government for their inhumanity, pointing to us children she asked, “What is the fault of children to be subjected to such suffering.” It was too much for a gendarme to bear, he pulled out his dagger and plunged it into my grandmother’s back. The more he plunged his dagger, the more my beloved Nana asked for heaven’s curses on him and his kind. Unable to silence her with repeated dagger thrusts, the gendarme mercifully pumped some bullets into her and ended her life. First my uncle, now my grandmother were left unmourned and unburied by the wayside.
We moved on. 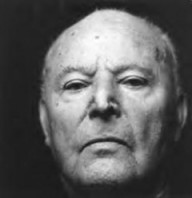 There was a girl, a girl who I had befriended on the road, earlier. Her name was Satenig. I remember her very well. She was not too strong. I saw her again in that basement. In the basement of the school where they had thrown us. She was there. She had a little bit of money and she gave it to me. “Don’t let them take me,” she said. “Don’t let them take me.” They would come around everyday and take whoever was dead or very weak. She was not in good shape, she was very weak. I stood her up and leaned on her. Held her up, so. They came. I was holding her up, leaning her up against the wall. But they saw her and took her… took her… 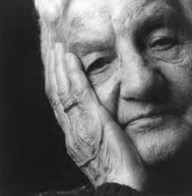 The crowds were huge in Meskeneh. We were in the middle of a vast sandy area and the Armenians there were from all over, not only from Marash. We had no water and gendarmes would not give us any. There were only two gendarmes for that huge crowd. Just two. Wasn’t there a single man among us who could have killed them? We were going to die anyway. Why did we obey those two gendarmes so sheepishly?
The word was that from Meskeneh, we were going to be deported to Der-Zor. My father had brought along a tent that was black on one side and white on the other. Each time gendarmes approached us to send another group to Der-Zor, my father would move the tent. He would pitch it on the other side of the crowd—as far away as possible. We were constantly moving. He bought us quite a bit of time that way.
Eventually, we crossed the Euphrates River to Rakka where we found an abandoned house—with no doors or windows—and we squatted there. But we still had no food. We used to eat grass. We used to pick grains from animal waste, wash them and then in tin cans fry them to eat. We used to say: “Oh, mommy, if we ever go back to Marash, just give us fried wheat and it will be enough.” 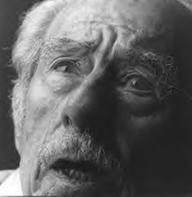 They took us from Hüsenig, to Mezre, to Kharpert to Malatia and then, after a couple of days walk, to the shores of the Euphrates River. It was around noon when we got there and we camped. For a while, we were left alone. Sometime later, Turkish gendarmes came over and grabbed all the boys from 5 to 10 years old. I was about 7 or 8. They grabbed me too. They threw us all into a pile on the sandy beach and started jabbing us with their swords and bayonets. I must’ve been in the center because only one sword got me… nipped my cheek… here, my cheek. But, I couldn’t cry. I was covered with blood from the other bodies on top of me, but I couldn’t cry. If had, I would not be here today.
When it was getting dark, my grandmother found me. She picked me up and consoled me. It hurt so much. I was crying and she put me on her shoulder and walked around.
Then, some of the other parents came looking for their children. They mostly found dead bodies. The river bank there was very sandy. Some of them dug graves with their bare hands—shallow graves—and tried to bury their children in them. Others, just pushed them into the river, they pushed them into the Euphra 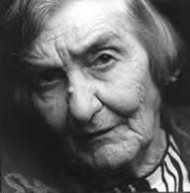 We had already been deported once, in 1915, sent towards Der-Zor. But, my uncle’s friend had connections in the government and he had us ordered back to Izmir.
Orders came again that everyone must gather in front of the Armenian church to be deported. My father refused to go and told us not to worry. He didn’t think the Turkish government would do anything to him, since he was a government employee himself.
Twelve Turkish soldiers and an official came very early the next morning. We were still asleep. They dragged us out in our nightgowns and lined us up against the living room wall. Then the official ordered my father to lie down on the ground… they are dirty the Turks… very dirty… I can’t say what they did to him. They raped him! Raped! Just like that. Right in front of us. And that official made us watch. He whipped us if we turned away. My mother lost consciousness and fell to the floor.
Afterwards, we couldn’t find our father. My mother looked for him frantically. He was in the attic, trying to hang himself. Fortunately, my mother found him before it was too late.
My father did eventually kill himself—later, after we escaped. 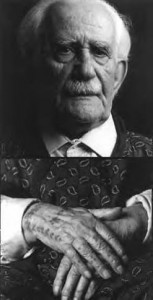 We walked for many days, occasionally running across small lakes and rivers. After awhile we saw corpses on the shores of these lakes. Then we began seeing them along the path: twisted corpses, blackened by the sun and bloated. Their stench was horrible. Vultures circled the skies above us, waiting for their evening meal.
At one point, we came upon a small hole in the ground. It was a little deeper than average height and 25-30 people could easily fit in it. We lowered ourselves down into it. There was no water in it but the bottom was muddy. We began sucking on the mud. Some of the women made teats with their shirts filled with mud and suckled on them like children. We were there for about a half hour. If we hadn’t been forced out, that would have been our best grave.
Many days later we reached the Euphrates River and despite the hundreds of bodies floating in it, we drank from it like there was no tomorrow. We quenched our thirst for the first time since our departure. They put us on small boats and we crossed to the other side. From there we walked all the way to Ras-ul-Ain.
Of a caravan of nearly 10,000 people, there were now only some of us 300 left. My aunt, my sisters, my brothers had all died or disappeared. Only my mother and I were left. We decided to hide and take refuge with some Arab nomads. My mother died there under their tents. They did not treat me well—they kept me hungry and beat me often and they branded me as their own.