How should genocide be remembered? This lesson and activity begins with a classroom discussion about how communities remember major historical events, including human rights atrocities. Students also learn the allegorical story of Armenian botanist JJ Manissadjian, who studied and catalogued a rare, wild tulip found in the Armenian homeland in pre-WWI Ottoman Empire. The tulip became extinct in the wild, but was cultivated later from seeds Manissadjian had sent to Europe.  Manissadjian was imprisoned during the Armenian Genocide, but escaped and immigrated to Europe and the United States. The tulip story is symbolic of the fate of Armenians.

Based on Manissadjian’s survival story, this lesson includes instructions for a school activity creating a real or artificial tulip garden in commemoration of the Armenian Genocide. 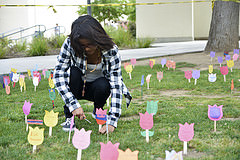 This Tulip lesson plan is now available in Spanish – download here for the Spanish version.