This poster, designed to commemorate the centennial of the Armenian Genocide merges a tasteful artistic rendering of an archival photograph with a brief historical summary.

The poster caption reads, “In 1915, on the orders of the Turkish leaders of the Ottoman Empire, 1,500,000 Armenians, more than half of the Armenian population living on their ancient homeland, were systematically murder by execution, death marches, drowning, beating, burning, and other torture. Their personal and community properties were demolished or given to Turks. No Armenian community remains in what is now eastern Turkey. The government of Turkey denies that the Armenian Genocide took place.”

Email to receive a poster for your classroom. 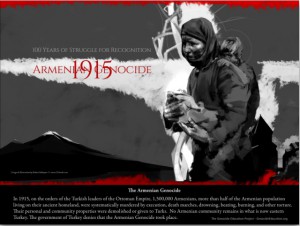