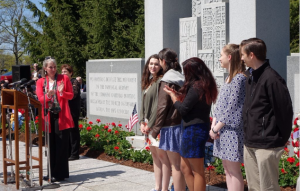 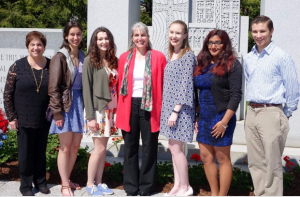 Dr. Sama, a professor of Italian and Film Media, began teaching the course “Italian Literature in Translation” in 2008, focusing on the Armenian Genocide and the Holocaust. The course includes an examination of Italian-Armenian author Antonia Arslan’s book, Skylark Farm, based on Arslan’s family experience in the Armenian Genocide. The second part of the class is about Jewish-Italian writer, Primo Levi’s book, Survival in Auschwitz.
“It’s one thing to learn about genocide from a book, or from the whiteboard in a classroom, but it’s another thing entirely to talk to someone whose life has been affected by it,’’ said student Shay Spacco. “If more students, especially in high school, got an opportunity like this, instruction about genocide would seem less like a lesson before a test, and more like a horrible reality that is part of human history, which should be important to everyone.”

Student Briana Clift said, “I find myself educating others about the guest speakers we’ve had and the books we’ve read during this course.”