April is Genocide Awareness Month and we encourage history-social science educators to incorporate lessons on genocide into their curriculum and classroom discussions this month. The Armenian Genocide, the Jewish Holocaust, the Bosnian, Cambodian, Rwandan genocides are all commemorated in April. Use GenEd’s “Ten Stages of Genocide,” the “Two-Day Lesson” (including comparative genocides), the “Memorialization” lesson, or others found in the Teaching Guides section of our website. 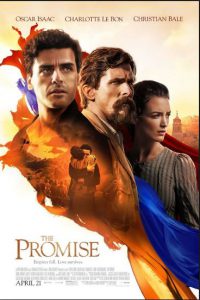 motion picture, providing educators and students a unique educational opportunity to understand the Armenian Genocide. Alongside telling a fictional love triangle, Hotel Rwanda director, Terry George, says he stayed true to the historical facts of the genocide. See and hear him discuss this at the Washington, D.C. film screening Q&A (at 27:49 min.).
Attendance on opening weekend, April 21-23, will impact the length of time the film will remain in theaters, so we encourage all to attend on that weekend.
New Documentary: INTENT TO DESTROY 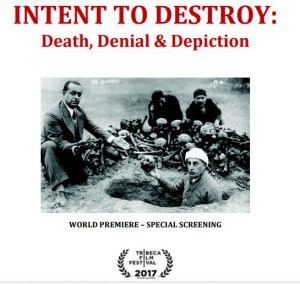 At the Tribeca Film Festival in New York City, the new documentary, Intent to Destroy, by Academy Award nominated filmmaker, Joe Berlinger, will premiere, playing April 25, 27, 28, & 29. “Intent to Destroy is a timely reckoning with the large-scale suppression of a historical tragedy,” writes Elizabeth Rao in the festival guide.

Commemorative Banner over SF-Bay Bridge
Bay Area commuters heading into San Francisco over the Bay Bridge are getting a world history reminder this month; a huge banner commemorating the Armenian Genocide, including GenEd’s website, is displayed over the Treasure Island Tunnel. 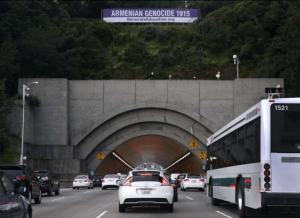 California Council for the Social Studies
At this year’s CCSS conference for California’s History-Social Science educators in Sacramento, GenEd’s Roxanne 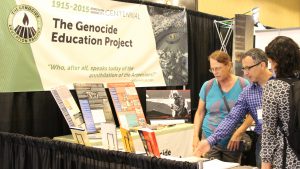 Makasdjian presented the workshop, “The Impact of Survivor Testimony on Teaching the Armenian Genocide.” Participants learned about the history of the Armenian Genocide through an exploration of classroom videos including GenEd’s documentary,  An Armenian Journey, and numerous recorded testimonies by survivors and witnesses.  GenEd also met teachers from across the state at its resource booth, providing instructional materials and guidance.
Day of Learning 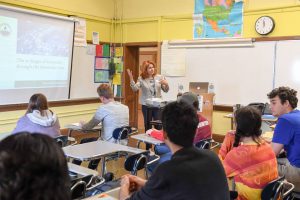 At this year’s Day of Learning at Galileo High School, hosted by the JFCS Holocaust Center, GenEd’s Roxanne Makasdjian presented a workshop for students, “The Ten Stages of Genocide: From the Armenian Case Onward”, which teaches students about the predictable stages of genocide, as a key to preventing it, and using the Armenian Genocide as a template.
Sara Cohan presented a separate workshop for teachers on behalf of the USC Shoah Foundation, exploring effective strategies for using Armenian and other genocide survivor testimonies in the classroom.
Special guest, Nanor Balabanian, a World History teacher at Eastside College Preparatory School in Palo Alto, spoke 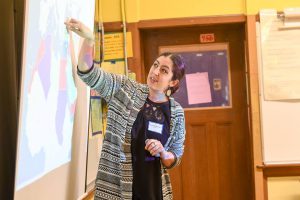 to students about her family’s history of genocide survival and engaged them in a discussion about their potential impact as global citizens on fighting injustice.
More than 700 students and educators from 120 California schools attended the Day of Learning, which included 18 workshops on 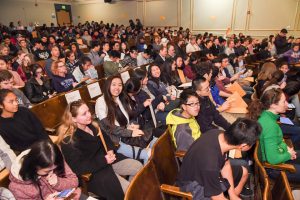 genocide to choose from. 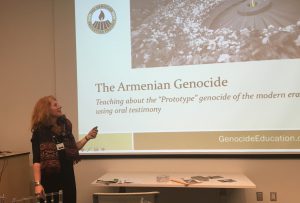 presented the workshop, “Testimony as a Tool of Empowerment,” demonstrating how visual testimonies of survivors of the Armenian Genocide, the Holocaust, and other genocides can be used effectively in the classroom.