Grade Level: Eleventh Grade to Adult
Through interviews with a hundred elderly Armenians, Donald and Lorna Miller give the “forgotten genocide” the hearing it deserves.Combining a compelling oral history with a trenchant analysis of the first major genocide of the 20th century, this moving study focuses on the Turkish murder of more than one million Armenians between 1915 and 1923 in a systematic campaign of mass deportations, slaughter, forced labor and starvation. 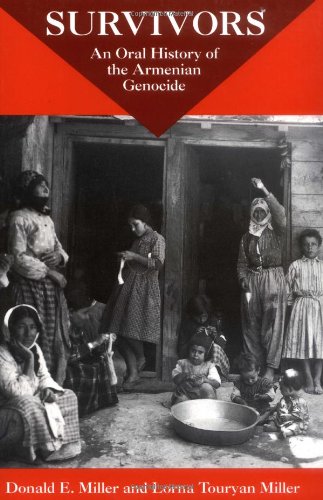 The Millers, a husband-and-wife team–he is a sociologist of religion at the University of Southern California, she is the daughter of survivors of the genocide–present formidable documentary evidence that this holocaust was the result of an ultranationalist Turkish government’s deliberate plan to exterminate the Armenians (still denied by Turkish officials).

Their interviews with 100 survivors of the genocide are organized to illustrate specific themes such as the imprisonment and torture of Armenian leaders, life in orphanages (which cradled a new generation of Armenians) and the psychological traumas that continue to afflict survivors in nightmares and waking moments. (Excerpted from Publishers Weekly)